This is gigantic if you read all of this congratulations and thanks!

Zerohour recently wrote a post on his blog Locked, loaded, so why unsub? (he comes across as a total dickwomble but that man has a point.) While I agree with the sentiment of his post. I am one of those people who will likely unsub for a while until WoD but mostly because I want to try out WildStar. Given that I no longer raid the lack of new content doesn't really bother me, I am a bit disappointed as I was expecting WoD to be a lot closer than December ("or before").

Zero's post did spur me on to get my ass in gear though! There's a bunch of things I've had on a mental check list for a while. Some I want (or need) to get done before Warlords, some I can continue working on throughout Warlords. 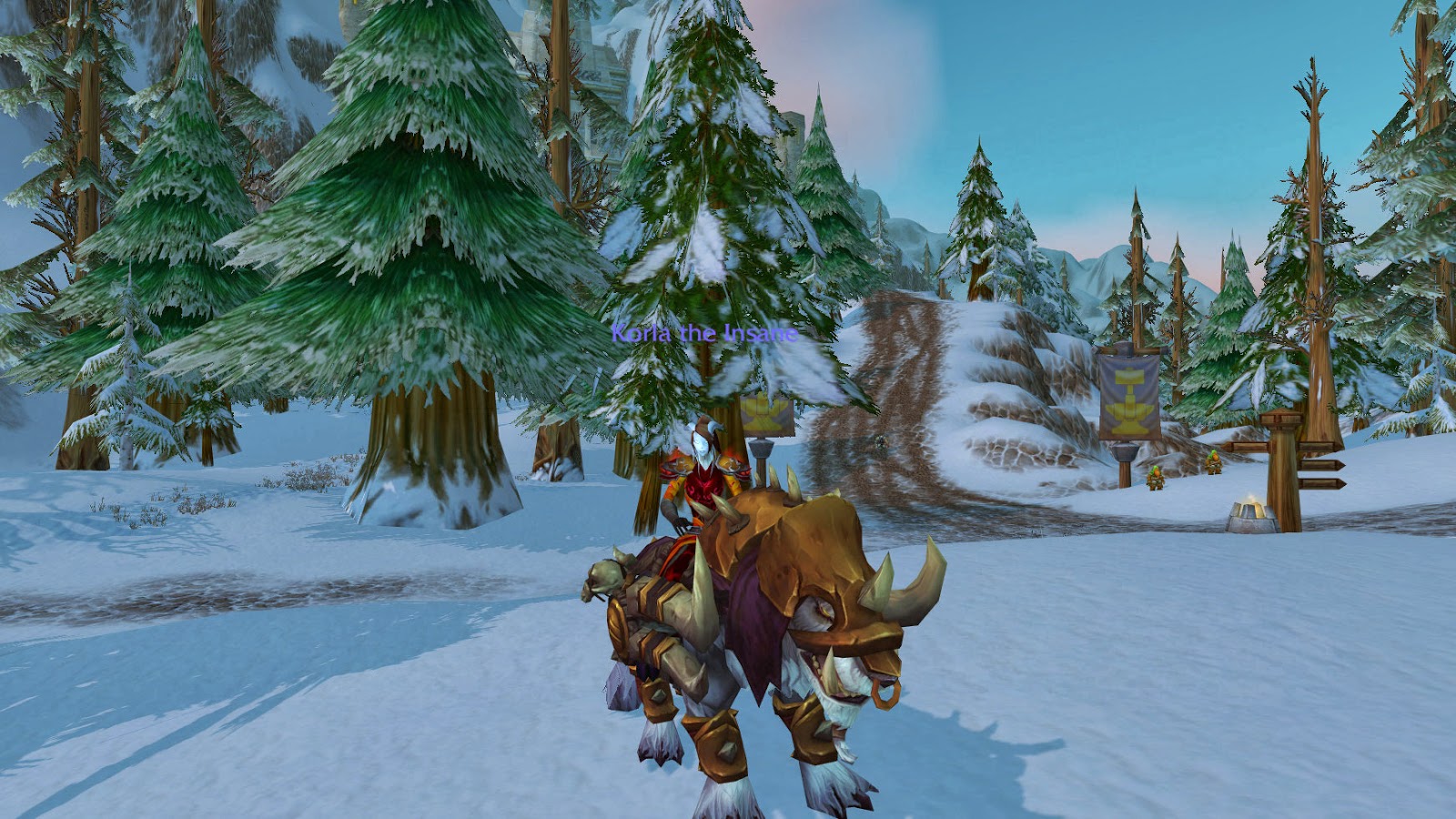 The minute I heard about Challenge Modes I knew I would want to do them. However when MoP launched I somehow got it into my head that they couldn't be done cross server. I wasn't prepared to try and pug them because I'm both pretty shy and not entirely confident in my own ability as a player. My Fiance, ex raid team and the majority of my friends all play on other servers. So I resigned to the fact that I was never going to get a chance to do them nor get the awesome Priest challenge mode armor. However thanks to a comment left on my blog (<3) I found out that they could in fact be done cross realm! Since then they've been on my to do list but kept being put off until now.

We started doing them last week with the intention of doing one each week on a Wednesday night and spending no more than two and a half hours on them. We're running with a Prot Warrior who has no mic, Ret Paladin, Warlock, Hunter and me healing on my Priest. On the first week we got Temple of the Jade Serpent and Gate of the Setting Sun. This week we got Shado-Pan Monastery and Stormstout Brewery. We're only going for Gold as neither of us see any point in going for less. On our first night we were a few seconds away from getting Gold on Temple of the Jade Serpent due to a miss timed heroism. We stopped mid way though the last boss and reset the instance, porting us back to the beginning to start over.

On the first night I ran as Holy but I've switched to Disc and I'll probably continue to do the rest as Disc. They're incredibly fun, if you've not tried Challenge modes yet I urge you to do so. We're already planning a second set of characters to do Challenge modes on. Same group of people just different classes. I think I'm going to go with my Mage as the set is gorgeous. It does mean however that I'm going to have to grind some gear for my Mage to get myself some more gem stlots.

Which brings me to the second and third thing on my list. Also 2b on Zero's list.


Learn how to play

Ok so for me this isn't quite as extreme as the examples Zero points out in his post. I can comfortably do over 100k dps on the majority of my alts. However I'm not entirely confident in my ability on most of them.

I'm a good healer. With the exception of Druid I'm fucking terrible at Druid healing I think because I don't enjoy it.
I'm an OK tank.
I'm an OK ranged DPS
I'm a fucking awful melee DPS. I hate the play style.

My fiance and friends are always telling me I'm better than I think I am. Regardless I could be better at all of them.

Going forward into WoD I've decided that I'm only going to play five classes. I don't need 17 level 90's or the other 14 between 85-90. This ties into gold making. Ever since I started making gold I've always focused on having way too many max level characters to churn out daily profession cooldowns. I just don't enjoy that anymore. Cycling though each character doing their farm and daily CD + crafting for so long has taken it's toll and I've become completely bored of the entire thing. Throughout WoD I'd like to at least try to limit myself to five characters. Sure I'll still make gold but by only using those five. I've not decided on which five yet. Only two so far. My Priest and a Hunter. This will also give me an ample excuse to play these classes better.

One thing in this vein that I'd really like to do is the Warlock green fire quests. I'm not a particularly bad Warlock but I'm certainly not very skilled either!

I started out life in Vanilla as Alliance but the second they brought out the faction change option on the Blizzard store I was off. I loved being Horde it just felt right but I was convinced to return to the Alliance to raid with friends. We later as a group all returned to the Horde but during Cataclysm I went back to the Alliance in favor of better raid progression. Now that I don't raid except for the occasional casual run and with everything being cross realm, I can be whatever the fuck faction I want. And I want to be Horde! Lok'Tar Ogar! 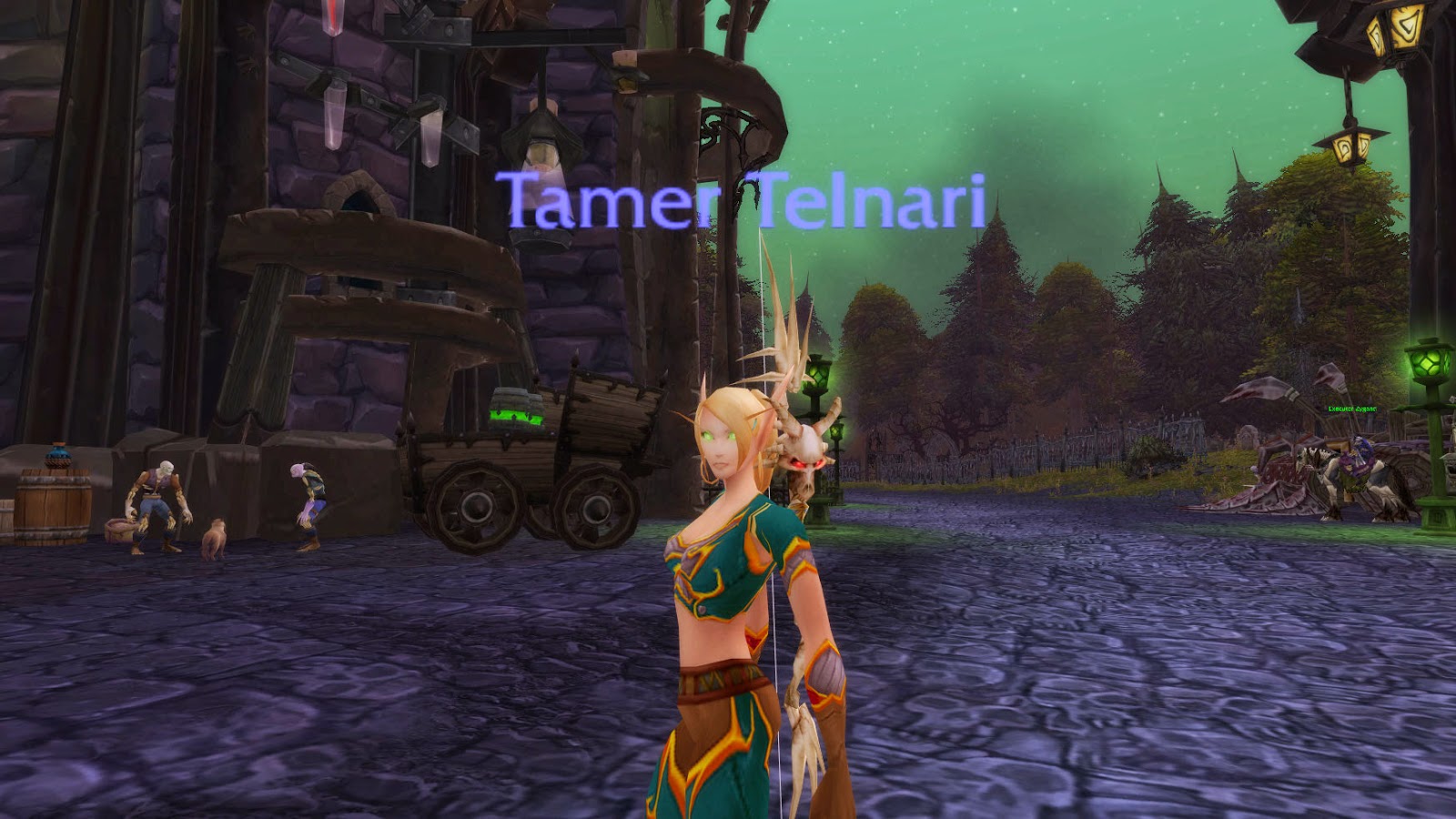 The Godmother has welcomed everyone to join her in leveling a character from scratch without boosting it to 90. You can find information here if You'd like to join in.

I've decided to level a Hunter on my chosen realm destination once I faction change my Priest. I'll happily pay to faction change and server transfer my Priest as she's my main however I refuse to pay for any other characters as none of them are as important as Korla. I don't have the same bond with my alts as I do with her. They're really just classes to me, as apposed to actual characters. If that makes sense? I've decided to level my little Horde Hunter with only the BoA weapon as I felt the xp gain was far too fast. I'm probably going to level mostly though Kalimdor as I haven't done so in a while but I want to complete any zones tied to the Undead first as they're my favorite Horde race. I've done the Blood Elf quests far too many times.

I completed the original Loremaster which was a giant PITA but when they revamped the entire thing in Cataclysm I also went though and completed the new achievements for completing each zone.
I only have Desolace, Stonetalon and Feralas left to complete. My new little Hunter may be tasked with this. 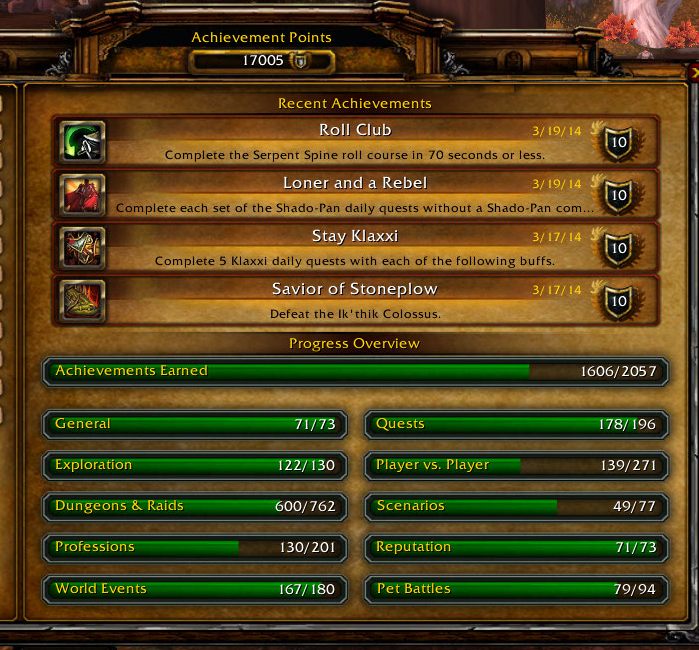 I went balls to the wall when achievements were introduced, I had a little bit of a competition going with a friend. But recently I've not really been chasing them. I got exalted with all of the Pandaria factions via dailies, I was one of the few people who actually enjoyed doing them at the beginning of MoP but never stopped to do the achievements tied to them Yak Attack, Getting around with the Shado-Pan for example. I've been working on some of these this week and it's been fun.

The hardest part is actually waiting for the exact daily you need to become available. At the moment I'm working my way though the Quest section of achievements. As I have almost everything in the General section complete. Missing 11 mounts for Mount Parade (200 mounts) and about 50k short from Got My Mind on my Money (loot 200,000 gold).

Within the topic of Achievments I have a bunch of things I need to get finished. I'm missing a load of Pet Battle achievements. I go though phases with Pet Battles where I get really into it then burn myself out on it similarly to archeology. I don't have many more to collect and level but I do have a few. I've also still not tried the Celestial Tournament so that's on the list.

The only thing I'm missing from Reputation is Emperor Shaohao. This is something I'm going to have to devote some serious time to as I don't do the weekly quests. So my reputation is so far behind.

I'm hoping to get a group together later this week or next week to finish off the Pandaria Heroic Dungeon achievements along with the Scenario achievements.

I've almost completely avoided Brawlers Guild since it's introduction. I think my Priest might be rank four. I'm terrified of being called bad from onlookers. The run back is also a pain if you do die. I'll admit that I'm a terrible Shadow Priest. I have a Shadow spec sometimes for doing dailies and such but for the most part I do them as Holy or Disc. Despite my Priest being my main since BC I've never raided as Shadow only doing the odd Heroic after well out gearing them. I'd really like to learn how to play Shadow and be able to do more than 150k dps. I could complete Brawlers Guild on another character, one I'm more comfortable DPSing on but I want to complete it on Korla.

Giant Dinosaur Bone - One of the mounts I still need is from handing in 9999 Giant Dinosaur Bones. Currently at 2000. I've been doing this on my Hunter but not nearly as often as I should be.
Domination Point Commission - After handing in 2000 of these Proveditor Grantley gives you a Rodent Crate which lets you summon and capture the Sumprush rodent battle pet. Currently at 1.3k.
Posted by Soco at 20:55